Many of today's modern lifestyle technologies were spurred by the Industrial Revolution, which began a new era of history in Japan in the 19th century. A century of reform, the 19th century was influential enough to spawn entire fields of research.。
This wave of reform swept through Japan's rail industry, too. The arrival of steam locomotives changed logistics in a major way; it's no exaggeration to say that this was one of the major factors contributing to Japan's role as a world technology leader today.
In addition to an exhibit showcasing a steam locomotive, which helped support an historic revolution, the 19th Century Hall also has a piano and large-scale organ on display, which played a role in the development of music and art, making for a truly elegant and luxurious setting to take a breather.

Inside the hall, actual steam locomotives are on display; they have a real sense of life to them, appearing as though they could take off on their tracks at any moment. Locomotives here include the D51, C56, C58, and the steam train Wakataka; the Wakataka was remodeled by students of the former Japanese National Railways Takatori Factory Technician Training Institute in September 1939. 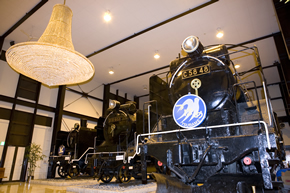 The Bosendorfer piano was loved by the masters of 19th-century classical music: Beethoven, Mozart, Chopin, Schubert, Bach, Brahms, Mendelssohn, and Dvorak.
The Imperial Bosendorfer grand piano on display here has nine extra keys at the bass end, for a total of 97 keys. It is no wonder this model is considered by many to be the best grand piano in existence, as the extra keys test the limits of the range of sound discernible to the human ear. The piano on display is also etched with the family crest of the Habsburgs of Germany.

Also on display is the Quantum by Allen Organs, which combines the latest electronic technology with a large-scale organ, considered the queen of musical instruments for many years.

To top of page

To top of page